Entrance hall in the 2016 Venice Architectural Biennale: ( 90 tons of recycled debris, from the 2014 Biennale!)

Across from me on the bus, an old man sat slumped, chin on chest, eyes closed. Greasy gray hair, white beard, grimy bronzed face. I tried to make out the title of one of the books jammed between junk in his bag on the floor. Elements… (of what?)

The woman next to me murmured something about the plight of the homeless in callous America. I said, that man seems familiar. Years ago at the Presbyterians’ (or Lutherans’) weekly drop-ins, his filthy hair had been brown, and he was known by some of us volunteers, not without affection, as Dirty Tom. Once he explained–he could be quite articulate–that he had always had severe aquaphobia and couldn’t tolerate the slightest contact with water.

Recounting a spell in the lockup ward in the local hospital, Tom had complained of the psychiatric resident, who turned out to have been our neighbor at that time. I remembered the neighbor saying then, “I don’t kid myself about being a father figure and doing good: there are guys in that ward who would like to KILL me.” Dirty Tom was one of them. He claimed that the doc had botched an electroshock treatment, and the young woman had died. I never heard the full story, but the neighbor did switch from psychiatry to family practice.

All of a sudden, the bus jolted, and the man’s eyes popped open, a startling blue in his grimy face, staring straight at me. He lurched to his feet, grabbed his pack, and got off at the next stop.

Recently I met up with a friend from my newspaper days. She, too, had eyes of a startling blue. She had written a few reviews for my books page, but then the paper died, she had a bad divorce, and we didn’t see each other for years. Catching up on each other’s concerns, I cited Syria, and she said that she was working with a young Syrian, through a group helping LGBTI refugees. Given the scope of the refugee crisis, I did wonder (silently) why the focus on such a niche category. Maybe she guessed my thought.“Listen, Francie,” she said, “What are you doing about the HOMELESS now? They’re still there. I don’t LIKE seeing them on the streets. I want you to DO something!”

She was right. After earnest but largely ineffectual years of volunteering, and some advocacy journalism, I had written a satirical novel

juxtaposing Berkeley’s homeless with the gourmet revolution. I suppose that I had hoped that it might be read as a moral tract, despite the sappy cover. “Trickle-down gastronomy,” said the NYTimes.. “The epicurean culture collides with the culture of poverty”.  And the culture of poverty and madness, not least on the streets and in the parks of my neighborhood of Berkeley, Caifornia, continues to thrive.

By now, the homeless have come to fill the margins of the shrunken middle class. In the clement climates of San Francisco and Los Angeles, tent cities form new communities under freeway exchanges and in the parks.

Twitch Napier, who is homeless, sits with her dog, Shiva, near tents set up under the 101 Freeway along Division Street, part of a large homeless encampment, in San Francisco, Feb. 25, 2016. An order by the city’s authorities to vacate the sidewalk tent camp in the commercial district has rekindled passions over the city’s longstanding homeless problem, which residents say has reached crisis levels. (Gabrielle Lurie/The New York Times)

An estimated one third of the homeless are mentally ill. And many of them are veterans.
During the Obama administration, spending tripled on homeless veterans’ housing and services, and the number in need went down by a third. Like too many of Obama’s initiatives, this has remained in the shadows.

We haven’t yet heard Donald Trump promise every homeless vet a condo. Early this year he did stage a benefit for homeless veterans in Iowa. By no coincidence, it was scheduled opposite a presidential primary debate where he was expected to come off badly. Not many of his efforts at distracting voters’ attention actually work.  Soon enterprising journalists dug up the story of Trump’s repeated attempts to get disabled veteran street vendors away from his Fifth Avenue property, which is already barricaded with topiary bollards. (Suggested campaign: Get unsightly old topiaries off Fifth Avenue.)

Perhaps it’s not news, but the emphasis now is to get homeless people housed first and treat their problems next. Los Angeles, like San Francisco, has not only a clement climate but a critical housing shortage that makes it next to impossible to find low-cost housing. Also just short of impossible is the treatment of psychological disorders and addictions in transit.

It’s taken decades, but measures to fund construction of special-needs housing are likely to be on the ballot in Los Angeles and probably statewide. Governor Brown has backed a $1.8 billion plan to use funds already in place for construction of housing for the homeless. California’s new director of Housing and Community Development, Ben Metcalf, seems to be that rara avis, an effective idealist, who has worked with successful housing programs in New York, Washington D.C. and San Francisco.

Another highly effective idealist is Alejandro Aravena, winner of the coveted Pritzker Prize, and director of the 2016 Venice Architecture Biennale.

I haven’t got to this Biennale yet, but I know that the theme is “Reporting from the Front,” emphasizing the potential for architects, beyond purely aesthetic concerns, to improve the quality of life for many thousands of people who don’t go to museums or biennales for pleasure or enlightenment.  The show, intelligently reviewed this very day by Christopher Hawthorne in the L.A. Times, “collects work from a range of architects operating on the forward lines of what Aravena calls “battles” against inequality, crushing poverty and environmental crisis and puts it on display with the informality of a journalistic sketch.”

The Chilean architect has devised original, low-cost “incremental” housing schemes where the basic half of each housing unit–roof, kitchen, bathroom–is built by the developer, and the rest, according to need (and means) is completed by the residents. Aravena’s firm has put the successful plans for four different projects online as Open Sources.  (Ben Metcalf, alert!) 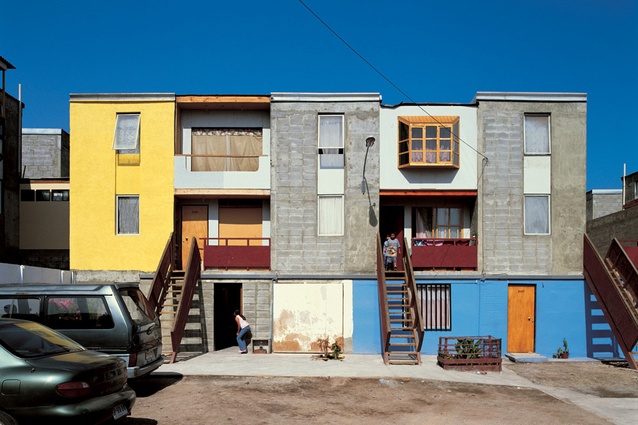 By Frances Smith Starn in Uncategorized on July 18, 2016.
← WAR, PEACE, MIGRATION, and CLICKBAIT From Tania’s Assault Rifle to Assad’s Instagrams →