Closest to home, the helicopters were back above Berkeley this week, along with the police from nine campuses and the Alameda County Sheriff’s Department. The latest techniques in protest enhancement include dramatic use of fireworks and safely contained fires.

Social media will soon feature these scenes of the conflagration from scores of phones, in a technique pioneered in the Arab revolutions.

Potus, always alert, tweeted a pre-dawn threat to defund Berkeley, for allowing and then cancelling, in the face of violent protest, the appearance of a truly scary young right-wing provocateur  invited by the College Republicans. Nobody gained from the hullabaloo but the anarchist Black Bloc, of whom we’ll no doubt hear more.

Meanwhile we await Potus’s promised actions against the ongoing carnage in Syria and the globalizing terror of ISIS.  Bombing ISIS does involve continued slaughter of civilians. The proposed Syrian safe zones for refugees would have to be defended. One thing he has already clarified:  there’s no haven for Syrian refugees in the U.S.

In the early years of the rebellion, foreign journalists were variously expelled by the Assad regime or beheaded by the rebels.  The major news organizations retreated to report on Syria from desks in Beirut or Istanbul. Only very lately have we had lucid analyses of events in Syria and the Levant. ( See Joshua Landis in TPR and Rania Khalek in FAIR.)  Recent accounts explain how incoherent U.S.and U.N. interventions have only served to lengthen the conflict. There have never been “moderate” rebels to “support” with arms.

Meanwhile, no new road to peace has emerged amid the ruins of ancient cities and hardscrabble desert. But given Potus’s apparent bond with Putin, what seems likely is the restoration of the Syrian government under Bashar al-Assad. For the ten years prior to the serial eruptions of the Arab revolution in 2010, Assad managed to keep the peace in Syria.  Sunnis and Shiites, Alawites and Druze, Iraqi Christians and Kurds, and Saudi versus Iranian oil interests–all were prevented from annihilating each other. Assad and his wife were popular enough to be able to appear in public without bodyguards. 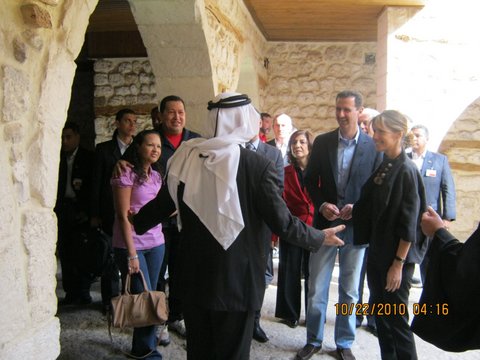 Assads as tourists in October 2010

Early on, Assad had outspokenly condemned the West’s war in Iraq as illegal, and even Obama never forgave him. (Two tall, slender, intelligent, somewhat arrogant men with attractive, charismatic wives…)   Oil makes strange allies, but when the U.S. partners with such murderous regimes as that in Saudi Arabia, condemning the heavy-handed security measures of Assad’s generals could be seen as somewhat hypocritical.

Last week Russia, Iran and Turkey met in the capital of Kazakhstan, in the Astana Rixos President Hotel. For only $1,913, including flight and hotel, I could have provided first-hand news of the conference. As it is, we had to rely on the New York Times.

“Palm trees planted indoors belied the subzero temperatures and blowing snow outside, as a flute-and-piano duo wearing evening gowns played “Strangers in the Night” and the theme from “Titanic.” Western diplomats, largely sidelined, huddled in the hotel’s Irish pub, and the United States ambassador to Kazakhstan, who was invited over Iran’s objections and attended only as an observer, avoided reporters..”

While the diplomats dance and drink in Astana, Syrian rebels amass in Idlib province in the northwest, where the Syrian government’s Minister of Reconciliation has been relocating rebels from Aleppo and Daraa.

Daraa, the southernmost settlement in Syria, had been the main stopover between Baghdad and Damascus for a thousand years or so. When we stopped there for water on a hot October day in 2010, the dusty square was filled with what I gathered later were refugees from the drought in the northeastern desert, Others had moved across its porous borders with Lebanon, Israel, and Jordan.

Not surprising that this place would be the Syrian flashpoint of the Arab uprisings. A few months later, some bored Daraa boys posted anti-government graffiti and were arrested.  The locals massed to protest, and government security forces firing on the crowd were filmed on cell phones, not unlike the chroniclers in Berkeley this week.  When one of the protesters died, videos of the funeral went viral, sympathetic rebellions broke out across the country and were brutally repressed.

Protests erupted next in Deir ez Zor, a dreary town on the Euphrates that was once an important trading post between the Roman Empire and India.  In October 2010, we Americans were welcomed as the harbingers of coming tourist masses. The owner of our hotel gave us a preview of his new restaurant, which had a southwest American motif and dance-hall chandeliers. Tourism had increased fourfold in the past year, he said.

Further south, we explored the ruins of Sumerian Mari and Roman Dura-Europus, where the ancient east-west trade routes intersected with the Euphrates. Returning to Deir, we crossed the old suspension bridge over the Euphrates; its eastern end was at the Iraqi border, then quiet. 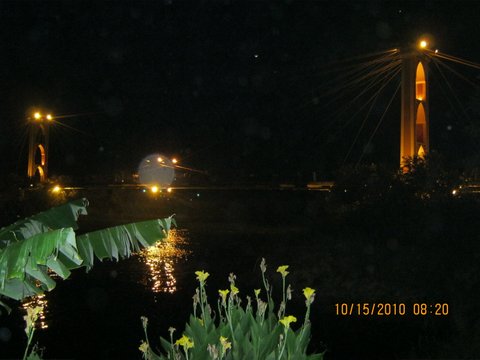 Bridge across Euphrates from Syria to Iraq

Syria’s latest conflict has killed more than 300,000 people and forced 4.8 million to flee.  Turkey has taken in more than 2.7 million of them, according to the UNHCR, followed by Lebanon with more than a million, and Jordan with disputed figures, some 228,000 to Iraq, 115,000 to Egypt.

Some 6.6 million have been internally displaced, driven from their homes. These would be the inhabitants of Potus’s projected Safe Zones.

A million ambitious Syrians have applied for asylum in Europe, and we read in the news just how few of them are welcomed.

The U.S., that nation founded by immigrants on the backs of its natives, has found room for some 14,000.  But no more.  Potus and his advisor, the Cromwell of Breitbart Manor, have closed the gates after the Syrian forbears of the likes of Steve Jobs, Paula Abdul, and Jerry Seinfeld. According to an Ellis Island Record, Selim Hosni, Jerry Seinfeld’s maternal grandfather. arrived in 1909 from Aleppo, Syria, aboard the S.S. Hudson with his wife and infant daughter.

In any event, this is no time for comedy.  Or is it?