On February 4, 1974, newspaper heiress Patty Hearst was kidnapped from her Berkeley apartment. The following months of hysteria led eventually to today’s saturation broadcasting, live and worldwide, of breaking news of terror and violence. Mini-cameras in front of a Los Angeles bungalow relayed the shootout and incineration of Hearst’s captors to millions of American living rooms.

In the earlier 1970s there was no shortage of bombings and terrorist attacks at home and abroad.  But only with the advent of live television coverage in real time did audiences gain immediate access to crime scenes, the victims, the grievers,  the shooters and their agonized parents,  teachers, and therapists. Then there was international renown on social media, inspiring homegrown psychopaths and jihadists alike. Campaigns such as “Zero Minutes of Fame” and “No Notoriety” ask news outlets to minimize shooters’ names and images.

Patty Hearst’s Berkeley apartment was one street over from our house, although we were living in Italy during that cold winter of her kidnapping, the oil embargo and Nixon’s impeachment. My husband was teaching a seminar at the University of Perugia, on the American presidency–far outside his field of Italian art and cultural history, but of great interest to the local leftists.

While Italy’s Red Brigade revolutionaries were better organized than the Symbionese Liberation Army, they were just beginning to wreak the havoc that culminated in the kidnapping and murder of former prime minister Aldo Moro in 1978, and the Bologna railroad station bombing in 1980.

The Watergate scandal fascinated Italian friends.  Their alarm at political corruption was not triggered by the low-level shenanigans of Nixon and his “plumbers”. Having succumbed to nine years of Silvio Berlusconi as prime minister, Italians know the power of a mouthy, narcissistic, misogynist demagogue. Not until the January 6 attack on the Capitol did Italy–and the world, see the present dangers.

At the time of Watergate, Hearst, a 19 year-old transfer student at Berkeley when she was kidnapped and recruited by the S.L.A., had declared an art history major.

Sadly, it was her attachment to an Olmec carving given her by a slain S.L.A. comrade that helped to convict her as voluntary accessory to murder.

SLA chief Donald DeFreeze was enrolled in a U.C. extension course on world history, for which I happened to be the reader. DeFreeze, taking the course from Vacaville Prison, had seemed  barely literate, but did write a few labored lines on a number of assignments. He didn’t finish, presumably because he was transferred to Soledad, where he soon escaped.  I was vaguely uneasy while DeFreeze was still at large, and  student revenge has indeed motivated the murder of more than one professor. DeFreeze died in the Los Angeles police raid.

Another student in that “postal” survey of world history was Edna Ann from Ketchikan. At the end of her carefully completed assignments, Edna Ann always appended some personal news…the spring thaw, the salmon fishing, her garden. I sent her an occasional postcard from Italy.  At that point Alaska had been a state for fifteen years. What did she make of Sarah Palin–and now of Donald Trump?

Every news magazine cover in those years showed Patty Hearst, as the revolutionary “Tania,” with her pale cheekbones and dark combat gear, her jubilation at presidential clemency, her wedding to her [check] and finally, her pardon.

Newspapers and television were supplanted by social media and the internet from the very start of the Syrian civil war, now in its tenth year. In March of 2011, the initial protests and crackdowns in Dar’aa were spread by amateur phone videos and quickly inflamed the entire country. Not all of the videos were authentic: one purported to show freshly-dug mass graves outside Dar’aa, and not until it had gone viral did someone notice that the license plate on a truck in the video was Iraqi, and perhaps the gravesite as well.

The ensuing violence was such that journalists, officially banned from the country, were being killed right and left. Correspondents from the major news sources began to send dispatches from Lebanon and even further afield. Meanwhile the smartphone and the internet became the instruments of both the rebels and the regime. Each has maintained a staff and budget for serious propaganda creation. Funds for rebel efforts are estimated to be in the millions of dollars from internet organizers in the Persian gulf states alone.

Bashar al-Assad’s Instagram site today has more than 60,000 followers. His winsome wife, Asma, was the subject of a puff piece in Vogue Magazine published in the first weeks of the war in Syria and then hastily killed. I read the interview before it was pulled, and it depicted her believably as an attractive, socially responsible young mother with extremely expensive shoes. These days, the Instagram photos show her meeting with wounded soldiers or playing with orphaned children. The subtext is clearly to show that her husband, the mild-mannered ophthalmologist, is unlikely to be the perpetrator of chemical and barrel bomb attacks on his own people. 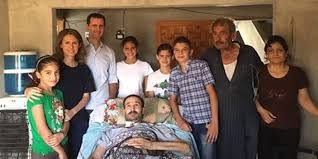 On Instagram, we could also view Bashar al-Assad shaking hands with Putin, and indeed  Russia remains  his most important supporter in the efforts to end the long and disastrous war.