Hotels in Times of Trouble 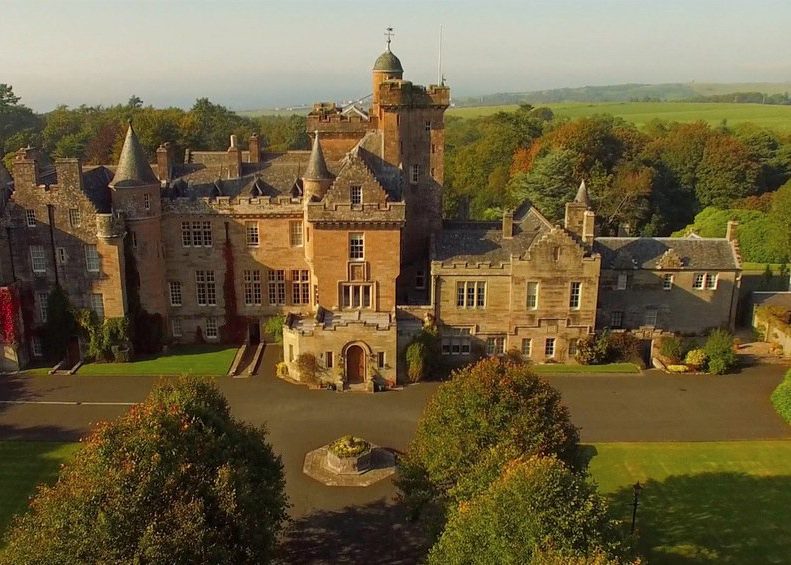 Trouble at the Majestic

The year is 1919, the scene a decaying imperial spa in County Cork, Ireland. The owner of the Majestic Hotel is an Anglo-Irish aristocrat who cares more for his dogs and piglets than for the starved villagers who raid his potato patch by night. His beloved piglets are housed in the former squash court and fed yesterday’s pastries.

The Majestic Hotel figures in Trouble, a tragicomedy about the Irish rebellion against British rule–performed against a background of guerrilla attacks by the rebels and vicious reprisals by the British. The “Troubles” exploded again in 1970, the year that J.G.Farrell’s remarkable novel appeared.

A century after the partitioning of Ireland, amid the planetary chaos of the coronavirus pandemic, California’s vacant hotels suddenly figure in a social and economic crisis of survival.

California governor Gavin Newsom, confronting the vulnerable and potentially infectious mass of 150,000 homeless in the state, has engineered an ingenious deal. Hotels and motels, most notably Motel Six, have made available for lease some 15,000 hotel rooms for housing the most fragile homeless–the aged and those with underlying health conditions. 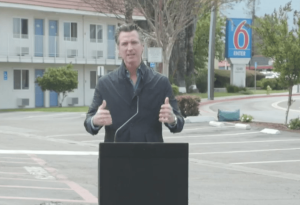 Newsom announced Project Roomkey at a press conference in front of a Motel Six in Campbell,California. Campbell is an unremarkable Santa Clara Valley town where I went to high school, when prune orchards were just giving way to housing tracts, highways, and the garage startups that transformed the farmland suburbs into Silicon Valley.

In the early days, Campbell, California had at least one street of “affordable housing,” inhabited by poor people, then generically called “Okies”. Gilman Avenue was a few blocks of small greyish bungalows, some with junked cars as lawn furniture. Betty the Moocher lived on Gilman. She was pallid and grimy with a plaintive, small-featured face. During lunch hour she would stand nearby, gazing silently at your sandwich. Sometimes we would give her something. It never occurred to me that she could actually have been hungry, though there were no free lunch programs then.

One of those Gilman bungalows is for sale right now as a “vintage” fixer-upper, for $1,220,000. Down half a million from its earlier listing. Most people cannot now afford any sort of home in California, but there are more free lunch programs. Just no housing.

Given the continuing pandemic lockdown, Project Roomkey hotel rooms would have been vacant anyway–a seemingly perfect solution, with FEMA ready to pay 75% of the costs. But two weeks ago only some 4,000 of the 15K available rooms were occupied. Tidy charts showed how many rooms had been leased for the project, how many were being prepared for occupancy, and the relatively few which were actually occupied.

It is not a simple process. The first challenge is the vetting of would-be occupants, by experienced social workers already overstretched by the Covid crisis. Applicants range from the responsible but roofless and medically fragile to lifelong addicts who may trash their rooms if not regularly supplied with their drugs. Medical records and background checks are needed. Staffing has to be arranged  to provide food, housecleaning, medical help–and security.

Several counties have already signed onto Project Roomkey.  But a number of southern California townships have rejected any use of their local hotels as homeless housing, either temporary or permanent. And anecdotal reports  from some of the occupied lodgings are not good. Social distancing, along with housekeeping and private property, are unfamiliar concepts for many formerly homeless folks.

California has the fifth largest economy in the world, one of the highest costs of living in this country, and the largest number of homeless of any state. Some see this as flagrant evidence of a failed government–the inability to provide for the welfare of its least able citizens. Newsom, as governor, and earlier as mayor of San Francisco, took on homelessness as his central issue. There was the controversial Care Not Cash, which reduced cash support and increased shelter and social services. Now there is Project Roomkey.

Here in my present hometown of Berkeley, 40 homeless have moved into two Oakland hotels that are part of Project Roomkey. Each room is $186 per day, to be 75% reimbursed by FEMA. For whatever reason, Berkeley jokes aside, these are not Motel Six rooms like those claimed by other counties, which normally rent for $76 per night. Meanwhile the proposal for 16 stories of housing to be built at People’s Park brings out opponents pointing to its 50-year history as a political symbol and a refuge for the homeless.

Newsom and his allies would like to see Project Roomkey succeed and extend beyond the pandemic. This cannot happen without aligning funds from state, local, and federal sources. And so far, even money has not proven to be the answer. Homelessness was a serious problem in California long before COVID-19, and will doubtless increase afterwards, given the economic devastation of the work stoppage as well as earlier problems with local zoning and construction workers’ unions.

Bond issues for building affordable housing have been passed and then failed dismally to address the need. In California it costs $450K to construct one no-frills unit of subsidized low-cost housing. This is based on rising costs of labor and material and the expensive delays between securing funding and local approval of the project and the site. Given the cost of new construction, adapting ready-made housing seems a rational solution to the very immediate needs of California’s 150K homeless.

Some say that this apparent emergency will shrink back into perspective once our society returns to normal. Others point out that “normal” has included indifference not just to homeless encampments under our clogged freeways, but to the climate crisis, to enormous income inequality, to mass shootings, and to the continuing partitioning of our electorate that gave us Donald Trump. ∞