My Father and the Generals

Daughters of the American Revolution

Through the years I had heard occasional rumors of a distant relative on my father’s side called Indian Mary.  When my son the anthropologist was writing about Ishi, the last Yahi Indian, the time seemed ripe to research the rumor. On balance, and on record, there was also an ancestral Civil War general, Eugene Carr, who later fought in the American Indian wars.

More recently there was my own grandfather, reportedly a gentle man, who fought in almost every war in his lifetime.  It’s a challenge to calculate how he managed to sire four boys and a girl, quite closely spaced, while on leave.  An even greater challenge must have been for my small but spunky grandmother to raise them all on sporadic soldier’s allotments. 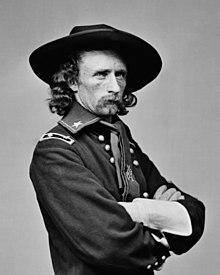 My father, late in life, chose to loathe another Civil War general who went on to slaughter Indians, George Armstrong Custer. He read everything published about Custer, who was, to be fair, loathed by many others. He and my mother travelled to various Custer sites, Gettysburg and Little Big Horn, if not to Custer’s grave at West Point. I might perhaps mention that a subsidiary interest of my father’s was the Donner Party.

It gave us both considerable satisfaction for me to assign my father to review a psycho-biography of Custer for the Berkeley Gazette, where most, but not all reviewers were my more literate friends and relatives.  Alas, Evan Connell’s fine book on Custer, Son of the Morning Star, did not appear before the Gazette and its nepotistic book section folded in 1984.

The latest grand entry in the long, defiant tradition of nepotism is of course Potus 45.  Whom to cite first?  British journalist Matthew Norman predicts much nepotistic merriment to come:  Ivanka will win the $600 million contract to supply new U.S. Army uniforms, Donald Trump Jr. will replace Ulysses S. Grant on the $50 dollar bill, & eleven year-old  Barron & two of his teddy bears will be appointed to replace the National Security Adviser and two four-star generals in the Situation Room.

Another American general loathed by my father was Douglas MacArthur. Here the dislike was more grounded; he had served under MacArthur’s command in the Philippines and in the occupation of Japan.  But it wasn’t until the Korean conflict that MacArthur’s megalomania came close to igniting a third world war. Luckily, President Truman had the courage to remove him from command before he could bomb China. (In our time the closest analogy might be some responsible general removing a president.)

It comes as no surprise to learn that P-45, as one world-class narcissist to another, has expressed his admiration for the doughty General MacArthur. He would have been a bit young to have watched the Congressional hearings that determined beyond doubt that Truman was justified in firing the general, and it’s hard to imagine Trump Sr. backing the Missouri haberdasher.

George Armstrong Custer was ranked last in his West Point graduating class, and Douglas MacArthur was first in his. But they were equals in egotism, flamboyance, and blinding self-righteousness. Custer’s oblivious bravado ended his and many hundreds of others’ lives at Little Bighorn. MacArthur was booted before he could make the fatal decision to bomb China. Like other self-promoting egotists, MacArthur later considered running for president, but had the brains to decide against it in the end.

Shortly before my father shipped out to the Pacific, I remember awakening, wailing, from a dream of a tractor, or a tank—ratcheting up the screen of my bedroom window. And one morning as I was playing alone in the courtyard of our apartment building, a moving van began to back slowly toward the wall behind me. In each case, I waited anxiously to be crushed by a large machine. This would have been wartime San Francisco.

My baby brother was still nursing after Pearl Harbor, when my father enlisted.  Even in her nineties, my mother’s eyes would turn hard as she repeated that she could never forgive him for leaving. At thirty, with two children, he might have been deferred. In fact, the war did mark him and us for the rest of our lives.

Early on, even before he was first posted to Alaska, he stopped eating. My mother was summoned, and we went to to visit him in a Vancouver hospital. In some gloomy Kodak prints, we are sitting on a porch, my father rail-thin in his dark uniform, and my mother, also thin, clearly trying to look cheerful. She did get him to eat again, so that he could be sent back to the war, in Australia, New Guinea, and the Philippines, where he contracted malaria.

Meanwhile, behind our cottage in Santa Cruz, California, my mother planted a victory garden full of zucchini, chard, beans, and tomatoes. Neighbors to the west sometimes sent my dimpled little brother home with his overalls stuffed with fresh corn and secured around his ankles, while I steamed with jealousy. The other neighbors were friendly but a bit odd. Mrs. Fertig was a health food convert  and often suggested to my dubious mother common weeds that would be nourishing and delicious in a salad.

My mother had taped a large pastel map to the living room wall, moving a colored pin to show where our father was stationed. During the years he was overseas, what I could remember of him mainly was the harsh wool of his uniform, its smell and feel.

One balmy Santa Cruz night, we were allowed to stay up late. Our father was coming home. Finally the screen door creaked, and there he was, hugging us all tight against his scratchy wool uniform. He’d brought us two glass animals filled with tiny candies. Of course I immediately coveted Bill’s puppy and despised my kitten.
Eventually  he opened his foot locker and pulled out, well, booty, from Japan—silk kimonos, platform sandals, inlaid chopsticks, and, I think, a sword.
In the months just after his return, we spent day after day at the beach.  Every day after school, he would read to me tirelessly, mostly from the Oz books, as if making up for the years lost in the war.

After the war, when my father found a job as a resident engineer with the state highway department, we moved back to Santa Cruz, where much post-war construction was underway, asphalt beginning to cover the state. Occasionally we stopped by to see him on a site, where he usually worked out of a trailer on a hot and dusty roadbed carved out of a slope by big orange machines.

Before the war he had been studying journalism at San Jose State, but the Depression—and probably drink—had driven him out of school and into a job as a surveyor for the highway department. After the war, he needed to support his family, and a civil engineering degree had seemed a safe choice. California highways and car ownership were expanding virally. Through the years he never seemed to take any pleasure or pride in his work, and I could see why.

On our last birthdays our daughter gifted me and her father with DNA test kits. This seemed an opportunity to confirm or deny the existence of my father’s Indian ancestry —and on my mother’s side, there was a mysterious Hungarian great-grandfather who might have been a gypsy or a Jew.

The disappointing results had only one, to me rather surprising ramification. The test showed it to be extremely likely that I had ancestors among the first colonial settlers of New England. Thus I could probably qualify for membership in the D.A.R. (Daughters of the American Revolution) a historically racist group that has spent many decades trying to improve its image.
At least the colonial New England connection fits with General Eugene Carr’s forbears. And I suppose it was obvious why his military nickname was the Black-bearded Cossack.