Fire, Fear and Unnaming in Berkeley, Budapest, and Parnassus Heights

As the world knows, California is ablaze once again, and there is blame enough to go around–starting with Trump, our climate science denier-in-chief and crown prince of fossil fuel protection.

Despite the repeated charring of millions of acres of the Pacific northwest, as well as the planetary pandemic and social and economic collapse, we continue to engage in the pettiest local squabbles over race and gender, history and hearsay. Along with news from the so-called Cancel Culture come daily reports of moving and removing statues and statutes, un-naming and renaming schools, streets and soup kitchens.

In a rare glimmer of light from the murky swamp of identity politics, a 1936 mural on the history of medicine in California, seems likely to survive the demolition of the building that holds it. 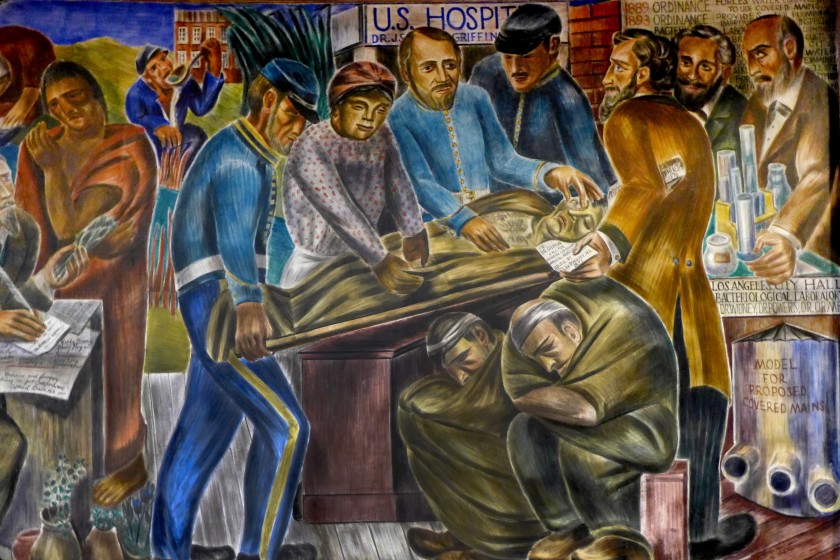 The mural, a fresco in a lecture hall on the Parnassus campus of the University of California, San Francisco, shows in one of its panels a Black nurse, Bridget (Biddy) Mason, ministering to a plague-stricken citizen. In this case the plague is malaria. But the point is that she is standing elbow-to-elbow with various bearded white elders of the Gold Rush state. To the right is a laboratory table where three of the hirsute gentlemen appear to be researching a vaccine or a cure. There is no sinister imperial or racist subtext to this scene’s narrative. Biddy Mason, a former slave, having worked as a midwife and healer, became known–in whatever order–as a church founder, a real estate entrepreneur, and a philanthropist. But how, in this time of racial and feminist turbulence, can this mural not be valued, and prominently displayed in the new Parnassus campus?

In 1945, my family moved to San Francisco so that my veteran father could study for an engineering degree. Meanwhile, my mother worked on Parnassus Avenue above Golden Gate Park at the medical center. My doughty little grandmother looked after me and my brother. Sometimes she walked us over to meet my mother after work, with me on my skates circling them self-importantly.

Parnassus Heights had been the site of the University of California’s first anthropology museum before it moved across the bay to Berkeley.

Tent city in Golden Gate Park after 1906 earthquake. Many sought medical help from the hospital at the Parnassus campus, visible in distance.

In that old museum, Ishi, the “last wild Indian in America,” brought there in 1911 by the anthropologist Alfred Kroeber, spent the last five years of his life. He  chipped arrowheads, sang songs, and made fire for scores of fascinated visitors to the museum. Above the museum, Ishi had a brush hut, and perhaps a cave further up the slope.

Sixty years later, my anthropologist son traced the original hideout in the mountains where Ishi had survived as last of his tribe. He describes the networks of tribal and institutional interests that emerged as he recorded the saga of the search for Ishi’s brain and the repatriation of his remains (Ishi’s Brain, Orin Starn, Norton 2004).

Sadly, un-naming and other symbolic changes such as renaming buildings, seldom appear to affect the substance or tenor of what happens within them. In removal of monuments and names from our shared racist past, we run the risk of confusing re-branding with reform. With repentance, perhaps, for the many thousands of California Indians killed and displaced by the time Ishi was discovered.

Whether Alfred Kroeber was truly Ishi’s friend or merely his patron has been much discussed—most recently in the charges and counter-charges in the case of the “Un-naming” of Kroeber Hall. After a hundred years the issue is still unclear. No, Kroeber was not responsible for the wholesale excavation of Indian graves and mass storage of their bones. He did write a great deal about the California Indian cultures, did testify importantly about them to the Indian Affairs Commission. But yes, he did ship off Ishi’s brain to float in a tank at the Smithsonian Institution.

Unlike un-naming, toppling or defacing a statue has at least an immediate visual effect– not to mention another alternative, which is banishment to a civic graveyard of politically superannuated statues like that in Budapest.

Imre Nagy memorial near Parliament before his recent demotion

Last year saw the disappearance of a popular statue of Hungarian Resistance leader and anti-Soviet prime minister Imre Nagy. In a rather obvious maneuver of historic revision by the government, Nagy’s statue was shunted off to a less central location.

As yet there is no monumental statue of the current Hungarian autocrat, who presently has most cordial relations with Vladimir Putin and Donald Trump, if not with most leaders of western democracies.

But that was then and this is now.

It’s perhaps cheering to Viktor Orban’s detractors that the Budapest Memento Museum has space to accommodate any number of rejected politicians in the near or distant future.

And Kroeber Hall may be re-named after Ishi. Of course we don’t know his real name: “Ishi” was the word for “man” in his Yana language.

By Frances Smith Starn in Uncategorized on September 18, 2020.
← Hotels in Times of Trouble Consider the Crow →