History repeats itself, it just does, as we have been told by everyone from Cicero to Santayana, not to mention Mark Twain. Even in my journal, emerging on an old computer:

12 Jan 09 …Meanwhile, 17th day of slaughter in Gaza. Drove across bay to Fillmore St. to see film Waltz with Bashir, which shows that some Israelis have doubts about wiping out Arabs.

27 December, 2008, Israeli strike called Operation Cast Lead, intended to halt Hamas rocket attacks on southern Israel and arms smuggling into Gaza. Heavy bombardment of Hamas bases, camps, and offices, moving on to mosques, schools, medical facilities, and houses. Israeli officials said that the civilian buildings were used by combatants, and/or as weapons warehouses. Palestinian deaths estimated between 1,166 and 1,417; Israelis, 13 (4 from friendly fire). By March 2009, international donors had reportedly pledged $4.5 billion in aid for the Palestinians, mainly for rebuilding Gaza.

Fast Forward Five Years 8 July, 2014, Israel launched Operation Protective Edge, to stop rocket fire from Gaza into Israel. The rocket fire had begun after an Israeli crackdown on Hamas in the West Bank following the kidnapping and murder of three Israeli teenagers. On 17 July, the Israeli military operation was expanded to a ground invasion directed toward destruction of the Gaza tunnel system. Seven weeks of Israeli bombardment, Palestinian rocket attacks, and ground fighting killed more than 2,200 people, the vast majority of them Gazans, some 75% of them civilians. Casualty figures are fungible, but nobody would deny the massive disproportion of Palestinian to Israeli losses.  But why, I have to wonder, is it never noted that ten times more Syrians have died in their recent civil war than Arabs and Jews in any Gazan conflict?

26 August, 2014, Hamas and Israel declared an open-ended cease-fire. In September, Palestinian children returned to school, many of them run by UNRWA, the United Nations refugee assistance program.

Some $16 billion will be needed to rebuild the devastated region. It is alleged that Israeli contractors are favored to do the highly profitable reconstruction of what their efficient army has destroyed.  Work delays are expected, due to elaborate precautions against using any of the tens of thousands of bags of cement to restore the Palestinian tunnel network.

But back to the last lines of my curiously germane (yes? yes?) journal entry of January 12, 2009: Sunday morning, call from [friends in Budapest] where the temperatures were below freezing because the Russians had decided to pull rank by closing the gas line through Ukraine. Later in January 2009, the prime ministers of Russia and Ukraine announced a settlement of the gas dispute that had drastically reduced supplies of Russian gas to Europe for nearly two weeks. 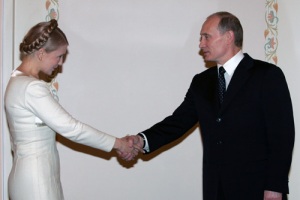 Vladimir Putin and Yulia Tymoshenko (the one with the blonde braid) agreed that Ukraine would begin paying for Russian gas at the much higher European price from the following year. Russia in turn would pay more for the gas to travel through Ukraine. The EU had been receiving about one-fifth of its gas supplies through Ukraine, and many other people besides our dear Hungarian friends suffered in that winter’s below-zero temperatures as a result of the Russo-Ukraine gas stoppage. The more provident European nations, such as Germany and Norway, have since developed their own gas supply lines as well as alternative energy sources. The Hungarians for their part are cannily reinforcing “an increasingly positive business relationship with Moscow,” according to a “senior government official.” A case in point: Russia had just been awarded a 10-12 billion euro contract for updating and expanding Hungary’s only nuclear power plant. It might be noted that this project costs only somewhat less than that of rebuilding the whole of war-torn Gaza. The no-bid contract, however, is questionable under the EU bloc’s rules of competition. Hungarian prime minister Victor Orban does not play by the rules, or makes new ones. In the wake of the Russia-Ukraine crisis over territory, he made the ill-timed observation that Hungarians in Ukraine should have greater autonomy. Given the complex and conflicted history of the region, Hungary’s neighboring states have substantial Hungarian minorities, and Orban’s interest in their well-being appears to some as sinister. In much the same way as Putin has cracked down on the activities of non-governmental organizations in Russia, Orban has set up a parliamentary committee to monitor civil society organizations, NGOs, receiving funding from abroad; he views them as paid political activists who are trying to help foreign interests in the name of preserving democracy. Russia and Ukraine were at odds well before Orban came on the scene. Ten years ago the Orange Revolution brought the Ukrainian president, Viktor Yushchenko, to power. Moscow was not happy about his energetic push for Ukraine to join NATO and the EU.  It’s a bit hard to keep straight, but Yushchenko was the one who was poisoned and survived with a horribly pitted face, not Viktor Yanukovych, who had to abandon his post in an unseemly hurry after virulent street protests against his rule.  Just hours after Yanukovych departed, his opulent presidential retreat was opened to the public so that Ukrainians were able to see for themselves the gilded plumbing, the sauna and private zoo set in 345 acres of private gardens. Hundreds of documents were found in a nearby river, revealing lavish spending and alleged corruption. They were dried off in the presidential sauna for later consultation. Braided Yulia was Yushchenko’s sidekick, until she wasn’t; they were known for a while as Beauty and the Beast. (As I am half-Slav, I might reasonably be expected to be embarrassed by the colorful excesses of Yulia Tymoshenko and her cohorts, not to mention her marketers, who advised the blonde coronet for an image remake after her involvement as a brunette in some shady business deals. But, as print journalists used to say, she’s such good copy. ) In 2007 Yulia went to Washington, where she met with Dick Cheney, Condoleezza Rice, and Stephen Hadley, and—in a not entirely subtle affirmation of Ukraine versus Russia—had a photo op with the outgoing President. 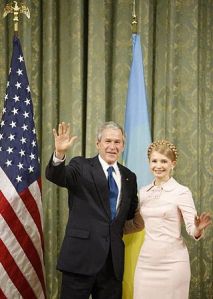 But after many other misadventures, long story short, Yulia was released from prison in 2014, just months before the latest Russia-Ukraine conflict erupted. “She [Yulia, quoted by her daughter Eugenia] said she was glad to be here in the new Ukraine made by the Ukrainian heroes, and she’s proud to be Ukrainian.” Although she didn’t do at all well in this June’s elections, surely we shall be hearing more from Yulia Tymoshenko.

Gloss: The  California drought of 2007-2009  was, broken by the very wet year of 2010, but reprised in 2011. For some surprising figures on agriculture and unemployment during the drought of 2007-2009, see the reliable report of the Pacific Institute available free: Impacts of the California Drought from 2007-2009). Spoiler alert:  California’s agricultural output during that period was actually a bit above normal, due to the farmers’ recourse of pumping large amounts of ground water for irrigation. Moreover, the number of agricultural jobs actually grew 2% between 2003 and 2009, although all jobs in other sectors dropped dramatically due to the recession. The poverty rate in the southern San Joaquin Valley, consistently above 20% for a decade, clearly has very little to do with wet and dry years. (For a much less reliable perspective on the most recent California drought, see my post of 4 September 2014, which I keep meaning to update.) 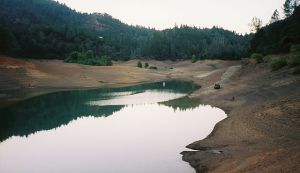 This is Lake Shasta, not a lake at all, but a huge, rather ugly man-made reservoir which we used to cross every summer en route to our family cabin in the Siskiyous–actually an old gold mining claim, now taken over by a hostile cousin, but that’s another story. The water level is about 37 % of normal for this time of year, and a wildfire has decimated the nearby town of Weed, California where we used to lay in groceries for our stay–beer, beef, chocolate, marshmallows, and corn, always lots of corn.

By Frances Smith Starn in Uncategorized on September 23, 2014.
← California Drought, Further notes on. Arms and the Woman →